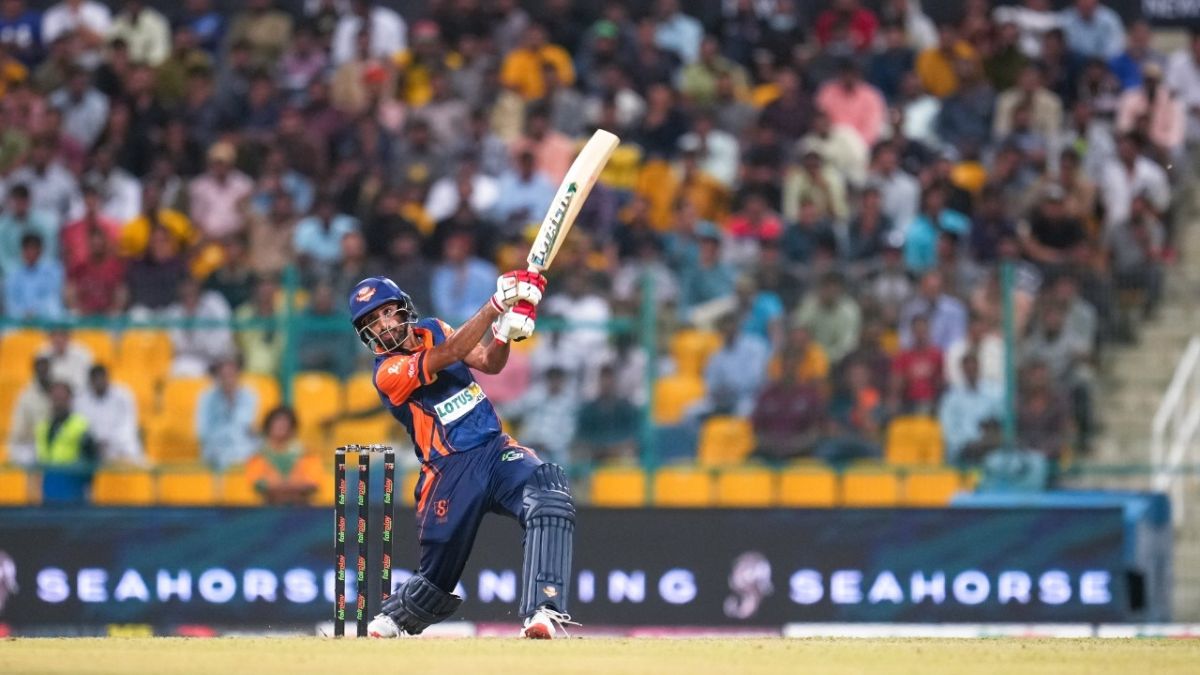 Samp Army, making their debut in this tournament, recorded their third successive victory through Janat and Miller’s unbeaten 76 runs partnership for the third wicket. Janat remained unbeaten on 58 off 28 balls with six sixers and one boundary while Miller remained unconquered with a timely 17.

Apart from them, Johnson Charles also played a valuable knock of 23 runs. Samp Army chased the target with four balls to spare after Chennai Braves posted 105 for 4 in 10 overs.

Samp Army won the toss and elected to field. Chennai Braves openers Adam Rossington and Dawid Malan gave a good start with Malan getting a boundary off Sheldon Cottrell’s to third man and Rossington hitting the last ball of the over for a six to deep square leg. Rossington also punished George Garton for a six to fine leg in the next over.

Anrich Nortje bowled a brilliant third over giving away just five runs but Malan made up for that in the next over from Karim Janat. He hit two consecutive sixes off the first two deliveries, one six to deep mid-wicket and another to deep square leg.

In the fifth over with the fifth ball, UAE’s Ahmed Raza had Rossington caught behind by wicketkeeper Johnson Charles for 19. In the sixth over, Malan too followed, clean bowled by Dwaine Pretorius’ second delivery for 32. His knock off 20 balls had two sixes and one boundary.

Ross Whiteley hit Pretorius’ fifth delivery for a six over mid-wicket. Raza bowling his second over gave only a boundary to Whiteley. Prospects of a big score for the Braves began to fade when Pretorius bowled a tight eighth over giving away only eight runs.

The braves needed another 19 runs to reach the 100-run mark with only two overs left. Cottrell was re-introduced for the ninth over. Dan Lawrence rose to the challenge and hit Cottrell for a six to deep square leg and also picked a boundary past the backward point. Seventeen runs came off that over.

Nortje, who bowled the last over had Lawrence, on 21, caught by George Garton at mid-wicket, running back for a well-judged catch. Carlos Brathwaite pulled Nortje straight to David Miller off the last ball for 1. In the end, the Braves posted 105 for 4 in 10 overs.

In reply, Samp Army needed a steady start and openers Johnson Charles and skipper Moeen Ali provided that. Charles in his usual style hit Olly Stone for two consecutive boundaries off the second and third deliveries of the first over. Charles also punished James Fuller for two boundaries in the second over.

Sam Cook, who bowled the third over, provided the breakthrough by getting Moeen Ali caught by Stone at mid-off for 6 and giving away only seven runs.

Brathwaite who bowled the third over picked the prize wicket of Johnson Charles with his third delivery. Charles hit Brathwaite’s full toss high into the hands of Whiteley for 23. His knock off 13 balls had five boundaries. Brathwaite gave away just seven runs in that over.

David Miller slog-swept Raza for a six in the seventh over and took 11 runs off that over. With 35 runs needed off the last 18 balls, it was anybody’s game. Stone bowled a tight eighth over giving away no boundary. This resulted in 26 runs needed from the last 12 balls.

Sam Cook bowled the ninth over and Janat pulled his third delivery for a six. Miller too picked a boundary off the fifth ball and 15 runs came off that over.

The last over began with Samp Army needing 11 runs off six balls. Janat hit Brathwaite’s first delivery for a six and reached his half-century in 27 balls. He also hit the second delivery for a six to win the match by eight wickets.

FIFA World Cup: Valverde to add spark as most eyes on Ronaldo in Uruguay vs Portugal